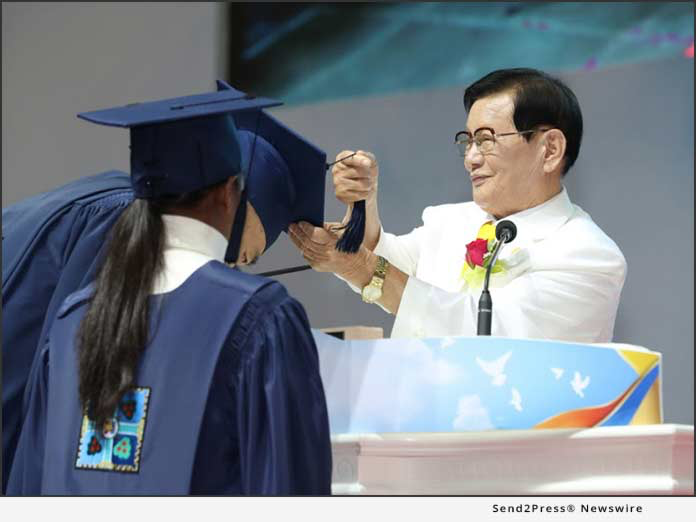 The graduates, 97% of whom were in South Korea, had completed an 8-month theology program that covers the Bible, with emphasis on the prophecies from the book of Revelation. The graduation ceremony was held on November 10, 2019.

Of course it is incredible enough to see 100,000 students graduating from a single denomination; however, what is more shocking is that Shincheonji — which is teaching the fulfillment of Revelation and has been growing at an incredibly rapid pace since 1984 is labeled as a “cult” by the Christian world of the Republic of Korea especially through the CCK (Christian Council of Korea).

The growth of Shincheonji is expected to grow exponentially after the graduation. With the evangelism rate of the graduates being over 100%, currently there are 200,000 plus students that are enrolled in the theology program. If Shincheonji continues to grow at this pace, then within 3 years it will reach a million congregation members, and the status quo of the religious world will change.

On the day prior, there was another article on prnewswire.com:

which has these interesting quotes:

Shincheonji Church of Jesus, the Temple of the Tabernacle of the Testimony (SCJ) is calling for the resignation of the President of the Christian Council of Korea (CCK) Pastor Jun Kwang-hoon as well for the CCK to be disbanded following controversial comments made by Pastor Jun.

A representative of Shincheonji Church of Jesus said, “President Jun Kwang-hoon claims that he has been anointed, and even asserting that the entire country of South Korea centers around him, and that he will kill God if things do not go his way.” He also explained, “Such assertions expose his heretic beliefs that use religion for power and oppose God. The CCK – a political organization masked under religion – must be shut down immediately.”

On Feb 26, 2020, an article in businessinsider.com had this interesting quote which mentions rumors about a virus began circulating in November:

“Rumours about a virus began to circulate in November but no one took them seriously,” an anonymous 28-year-old kindergarten teacher who belongs to Shincheonji told the Post. “I was in Wuhan in December when our church suspended all gatherings as soon as we learned about [the coronavirus].”

The kindergarten teacher wouldn’t comment on whether any Shincheonji members from Wuhan had traveled to South Korea recently but also insisted that they had nothing to do with the mass COVID-19 cases that have erupted there.

“I don’t think the virus came from us because none of our brothers and sisters in Wuhan have been infected,” she told the Post. “I don’t know about members in other places but at least we are clean. None of us have reported sick. There are so many Chinese traveling to South Korea, it’s quite unfair to pin [the disease] on us.”

Student and teacher of reality in all its forms. I self-published my personal experience of discovering and trying to understand and use a model of reality based on the Many Worlds Interpretation of Quantum Mechanics: Surfing the Multiverse: Finding Happiness One Universe at a Time Available on Kindle and from Amazon, and found in blog post form at: SurfingTheUniverse.com View all posts by J. Sands Loch