In 20200417F Day 108: Surfing the Multiverse back through a Pandemic Wormhole and 20200321S Day 81: Three to the Fourth Power is Eighty-One, I documented the exponential growth of worldwide COVID-19 cases. I assumed an initial outbreak date of Dec 12, 2019. This led to the following:

It’s been a total of 21 weeks since Dec 12, 2019. There are reports that the initial outbreak case may have happened earlier than Dec 12. Today, I tweeted an answer to a question from @DanielleFong in which I researched the first case to be Nov 17.  That would be 128+45=173 days ago, or almost 25 weeks ago. While confirmed cases were definitely at least doubling every week in the beginning of the pandemic, the recent doubling rate is about half the initial rate. By this weekend, the first case will be 176 days ago and the number of doublings will be 22. 176/22 gives exactly 8 days doubling time.

"Some worries held the stock market back"

SANTA CRUZ, California – I have been interested in treatments for COVID-19 since my brother sent me a treatment involving hydroxychloroquine, zinc, and azithromycin. When I heard that a doctor in Texas, near my hometown, was treating patients at a nursing home, which was on Logan Street, I had to learn more. Here are the notes I took from an interview that Dr. Robin Armstrong had with Joe Piscopo on April 13.

JP: Are older folks affected most?

RA: Yes, they are more predisposed to COVID-19, just as with other similar illnesses.

JP: Does this virus keep circulating in a closed area?

RA: Yes, this virus is transmitted very easily with RO of 2-3. It can live on surfaces up to 48 hours. That’s why this virus is different. It’s also different because people shed the virus while they are asymptomatic.

Susan, 68yo: If symptomatic, do I ask for a drug from the beginning, or wait until breathing problems occur.

RA: We really don’t know. In our nursing home, we wait until someone becomes symptomatic. The majority of people have mild symptoms and get over this. In India, they are taking it prophylactically now. I’m not recommending that yet here.

JP: Hydroxychloroquine usage in India?  The deaths there are much less.

JP: What about platelets?

RA: You can harvest blood plasma with anti-covid-19 antibodies and some people have had success with that. This is for very ill hospital patients. My goal is to keep people out of the hospital.

RA: I’m on the Republican national committee now and that’s why some in the mainstream media has been attacking me regarding this treatment.

JP: What is the agenda of the mainstream media in attacking this?

RA: Their entire focus is on defeating Trump and anything that brings him down, that’s what they are aiming for. I treated my patients based on the studies out of China and France – not because Trump suggested it.

RA: We have an ample supply of it – Bayer is the maker of it – it shows promise and we should be prescribing it for people.

RA: I’m sure hoping so. Texas has not been as hard hit as New York City. We are more spread out and rural, so it’s harder for the virus to jump from person to person. We need to listen to the scientists and do it in a wise manner.

Today it was also announced that the “15 days to flatten the curve” plan of social distancing guidelines has been extended to 45 days. New York still has the most new total and new deaths due to COVID-19 at 965 and 82, respectively. New Jersey, Michigan, Illinois, Louisiana, California, and Washington all had reported 10-21 daily deaths yesterday. The statistics from worldometers.info also show the US with a total of 142,224 cases, 2,485 deaths, and 4,559 recovered. Both Pres. Trump and Dr. Fauci are in sync with preparing the country for 100,000 or more deaths due to COVID-19.

I’m still hoping to intercept a future – to head in a way back to the future of a parallel time line that I was in before I started daily (more or less) blogging 89 days ago. I’ve somewhat arbitrarily selected June 8, 2020, as the date I wish to intercept. Or, perhaps, I’ve sent myself a message from the future that caused me to pick that date for some reason.

For the last four days, I’ve been sensing a change in my universe surfing. I am no longer interested in this universe where a pandemic sweeps the globe. In this universe, I consume more twitter than I have in a lifetime prior. My intention to create instead of consume has been challenged by my weak free will in the face of the universe. I have a choice now. I can continue to be pummeled by the huge waves of the universe sending me into this pandemic. Or I can strengthen my free will and surf to a new set of universes in which COVID-19 is not dominating the daily thoughts of myself or the world.

From what I know about universe surfing, I can’t do this alone. So, if you find yourself reading this, please join me in surfing to a universe in which SARS_CoV_2 and COVID-19 are not dominating the world’s psyche and are only a distance memory. Oh, and your retirement savings will also be higher in the universe I’m surfing to. I’m putting myself on an 80-day surfing plan from 4 days ago. Target date of June 8, 2020, the 160th day of this year.

Santa Cruz, CA: Today I drove south on the 1 and made it to Salinas River State Beach. It was quite windy and also empty, except for a lone fisherman. The trail next to the beach had a few hikers – and also some horse riders.

While COVID-19 is continuing to spread as the math predicts, I’m feeling more optimistic that it’s possible fo me to surf to a universe where COVID-19 is not seen as anything more than a really bad flu virus. The universe I sense is one where the 80+% of people who experiences mild or no symptoms from being infected with SARS_CoV_2 slowly build up a herd immunity across the globe. 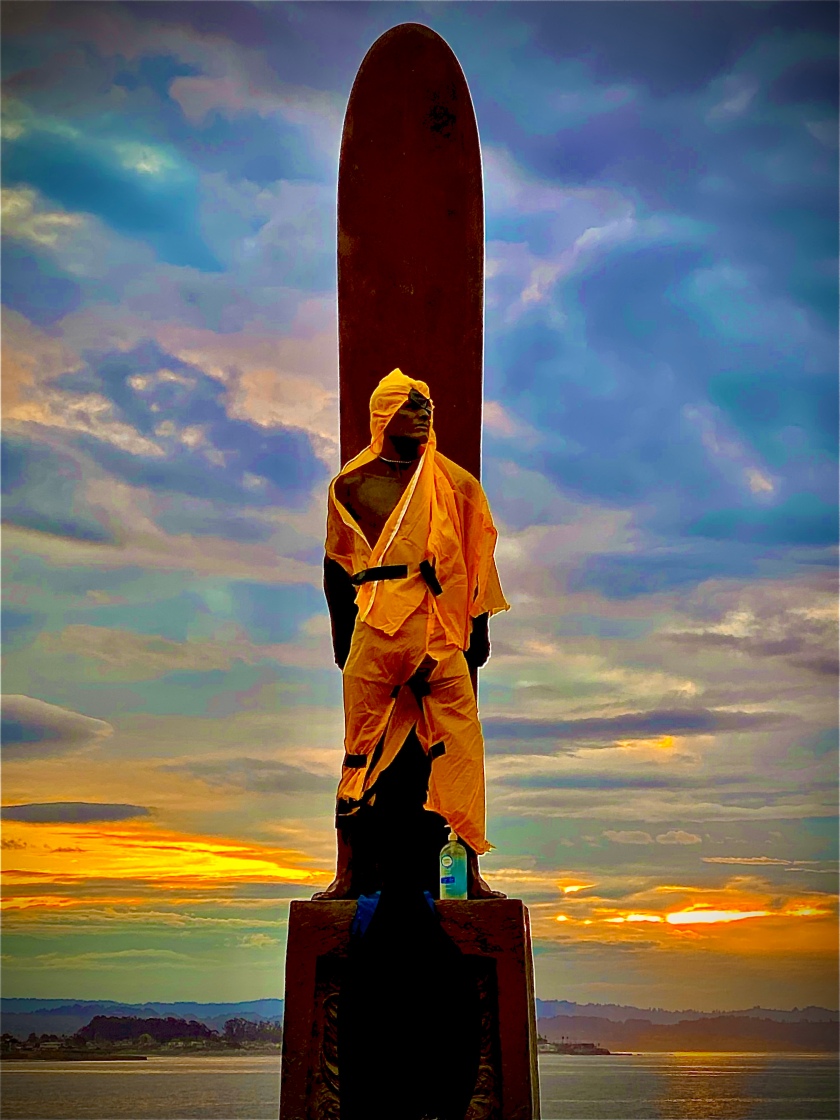 I drove up the 1 towards San Francisco and the highways were still filled with cars traveling to the beaches along the 1. At Swanton Berry Farm, there was a sign requesting everyone to wash their hands before coming inside. The jelly samplers were gone, along with the tables where people used to eat. To go orders were still ok.

Updates on the coronavirus today are:

The housemates in the house where I’m staying are all talking about coronavirus much of the day. Visitors are not allowed inside the house per the house rules.

Something surfing related I just realized is that the areas of the US most heavily hit by coronavirus outbreaks are the areas which are more liberal than conservative. Liberals have also been the ones who have been sounding the alarm about the pandemic while Trump previously had been calling the media alarm a “hoax” and comparing COVID-19 to the flu. Could the liberals be resonating with the energy of universes where COVID-19 is much worse than the flu while the conservatives are resonating with energy of the flu being worse? Possibly, but then how would republican senator Rand Paul being the first COVID-19 case be explained.

In financial news, as much as I want to call a market bottom, I think the next week is going to be rough. The best bet for a market uplift is if the US congress can agree on a relief package for individuals and businesses.

20. The U.S. Congress will continue to vote primarily along party lines (Duh). This will increase the chance of a third-party movement gaining momentum.

19. The Wuhan coronavirus will spread in a similar way as other SARS-like coronaviruses. All cities with direct flights to Wuhan will be infected.

17. I will update this blog from at least two other countries.

16. Apple will have an exciting “one more thing”.

15. AMD will continue to take away server market share from Intel.

14. A 3rd-party candidate will shake up the U.S. presidential election.

12. Religions across the world will reclaim their role as protectors of the long-term survival of humanity by joining together with a common voice against climate change.

10. April will be a tough month for the stock market, which will end 2020 roughly even after a rollercoaster of a year.

8. Combined global land and ocean surface temperature for August 2020 will be almost a full degree Celsius above the 20th century average of 15.6°C (60.1°F).

5. Tom Steyer will continue to gain unexpected support for President at the expense of Biden.

4. Bernie will gain the Democratic nomination in a brokered convention and will select a woman as his running mate.

3. Despite all of the saber rattling, 2020 will be a peaceful year.

2. Trump will not be removed from office.

I’m superstitious and will definitely notice the number 13. I will often take greater care when it’s Friday the 13th, but I have taken advantage of cheap tickets to fly on a Friday the 13th. I use to judge people for being superstitious. Now I just wonder to myself if the people who live or work on the 14th floor of a building feel better or worse knowing that there is no 13th floor. A 2007 Gallop Poll reported that 13% of people living in the U.S. would be “bothered if given a room on the 13th floor” of a hotel.

In other news, it’s 15:40 and I have my MacBook Pro back with a new battery at 100%. Six hours later, the battery is at 67% without much usage – in fact the notebook was closed much of that time. More analysis of the battery to come later.