I prefer to write my dates in YYYYMMDD format. It makes sense to me from a general-to-specific way of thinking and it also is numerically sorting friendly (at least until 10000/01/01). Whether using YYYYMMDD format, MM/DD/YYYY format, or DD/MM/YYYY format, today’s date of 02/02/2002 is a palindrome. The last time this was true was 11/11/1111, which coincidentally was 909 years ago – also a palindrome number. There’s a third coincidence which is this day of the new year is day number 33 – also a palindrome number.

A palindrome is a word, phrase, or sequence that is the same when read backwards or forwards. For a parallel worlds viewpoint, palindromes are like portals to a completely different set of universes in which words or sequences are written in the opposite manner. This is because the palindrome is the same in both sets of universes even if many other things are likely to be very different. So in a universe where we count:

Then 33 and 909 are both written the same. Notice though that in these backwards number universes, the year would be 0202 and the month/day would be 20/20, so the date would actually be written differently (20/20/0202). It would still be a palindrome and still be the first palindrome in 909 years.

Notice that the palindromic sequence is a matching nucleotide in reverse, so that TCTT is a palindrome for (read in reverse) AGAA. I just did a blast search of the length-22 palindromic sequence and found many hits – the vast majority were for SARS coronavirus sequences. One of these, Bat SARS-like coronavirus WIV1 (ID: KF367457.1), I noticed was also in an science mag article:

I more recent article, Complemented Palindromic Small RNAs First Discovered from SARS Coronavirus, mentions this same 22-bp DNA complemented palindrome sequence as one in which a 19-nt cpsRNA (complementary palindromic small RNA) sequence was found (UUAACAAGCUUGUUAAAGA) named SARS-CoV-cpsR-19. This paper reported results which suggested, along with past research, that this small RNA plays a role in SARS-CoV infection or pathogenesis. An image from this article helps to show why these complementary palindromic small RNA sequences are important:

The S&P 500, Dow, and Nasdaq all fell over 1.5% today. This is in alignment with the feeling I mentioned in 2020 Day 25: Wuhan Coronavirus in the Year of the Rat. However, the feeling I felt seemed to be further in the future. What’s more interesting to me is how I’ve been affected – specifically my desire to remove an old habit of checking the stock market. It seems that as my will power strengthened, the multiverse showed me her power and tested my will power until I eventually succumbed and checked the stock market. I now feel surrounded by lots of universes where I check the stock market multiple times daily. The multiverse amuses me when she shows herself to me in this fashion – humbling my ego that believes that free will alone can get me to where I want to go.

Photo Credit: The Institute of Microbiology at the Chinese Academy of Sciences released yesterday the first close-up images of the Wuhan Coronavirus.

Sixteen days ago I decided to write a blog post: 2020 Day 9: New Strain of Coronavirus found in Wuhan, China. Eight days ago I felt called to dive into the details of the Wuhan Coronavirus in a second blog post: 2020 Day 17: Wuhan Coronavirus infections in Thailand and Japan. I’m now beginning to wonder if these two blog posts will be understood more clearly through a universe surfing viewpoint that does not require time to move in only one direction, and instead allows for anyone to quantum feel possible futures. Quantum feeling is different than prediction. Prediction assumes a classical arrow of time in one direction and looks for cause-and-effect relationship to justify a predicted outcome. Quantum feeling assumes a bi-directional arrow of time and allows future events to “cause” events that precede it, in our normal classical way of measuring time. Quantum feeling starts with an unexpected event – such as me deciding to blog about a new strain of coronavirus – and then imagines different futures that would be connected to that unexpected event when looking backwards in time from the future. Quantum feeling is a key step in universe surfing because it shows you a window to your possible futures in a way that expected events, such as habits, cannot.

In the last week, the following events have happened:

Quantum sensing can also appear as a déjà vu feeling. Laurie Garrett, a reporter for CNN, reported yesterday that when she read reports of patients exhibiting symptoms of pneumonia as early as December 12, 2019, she had a “chilling sense of déjà vu”. Seventeen years ago she reported on the SARS virus pandemic that caused illness in at least 8000 people across 37 countries and was associated with at least 774 deaths, including 299 in Hong Kong.

Quantum sensing can also appear as fear. Guan Yi’s quote above (“but this time I’m afraid”) is not encouraging.

Universe interference can be seen when events happen that appear to come from a different universe. For instance, Dr. Liang Wudong fell ill last week and died from an Wuhan coronavirus infection. He had been the head of the ear, nose and throat department at one of Wuhan’s top hospitals, Hubei Xinhua Hospital. He was “at the front line” fighting against the coronavirus. However, he also retired last year and there’s a universe where he was not involved in fighting the coronavirus. The Wall Street Journal’s reporting was perhaps affected by this universe when someone wrote “It isn’t clear if Dr. Liang had been involved in the treatment of other patients.” Or maybe they were just trying to calm the stock market and make sure that the party continues. I’m feeling now a universe where the stock market is negatively affected by the Wuhan coronavirus.

This morning I thought it would be interesting to use this blog as a way to experiment with quantum feeling parallel worlds. My hypothesis is that parallel worlds can be sensed, and that the feeling of sensing a parallel world is correlated with the feeling of a synchronicity, and furthermore that the synchronicity is related to an event that ties the parallel worlds together. For example, eight days ago I sensed a parallel world in which the Wuhan Coronavirus was a bigger event than it was in this world. I believe this sensing caused me to write a blog post about coronaviruses in quite a detailed manner. Since then, the Wuhan Coronavirus (it’s slightly interesting that I called it this above as I now see that wikipedia calls it the same – not that unexpected though) has resulted in two deaths in Wuhan, two cases in Thailand, and one case in Japan. 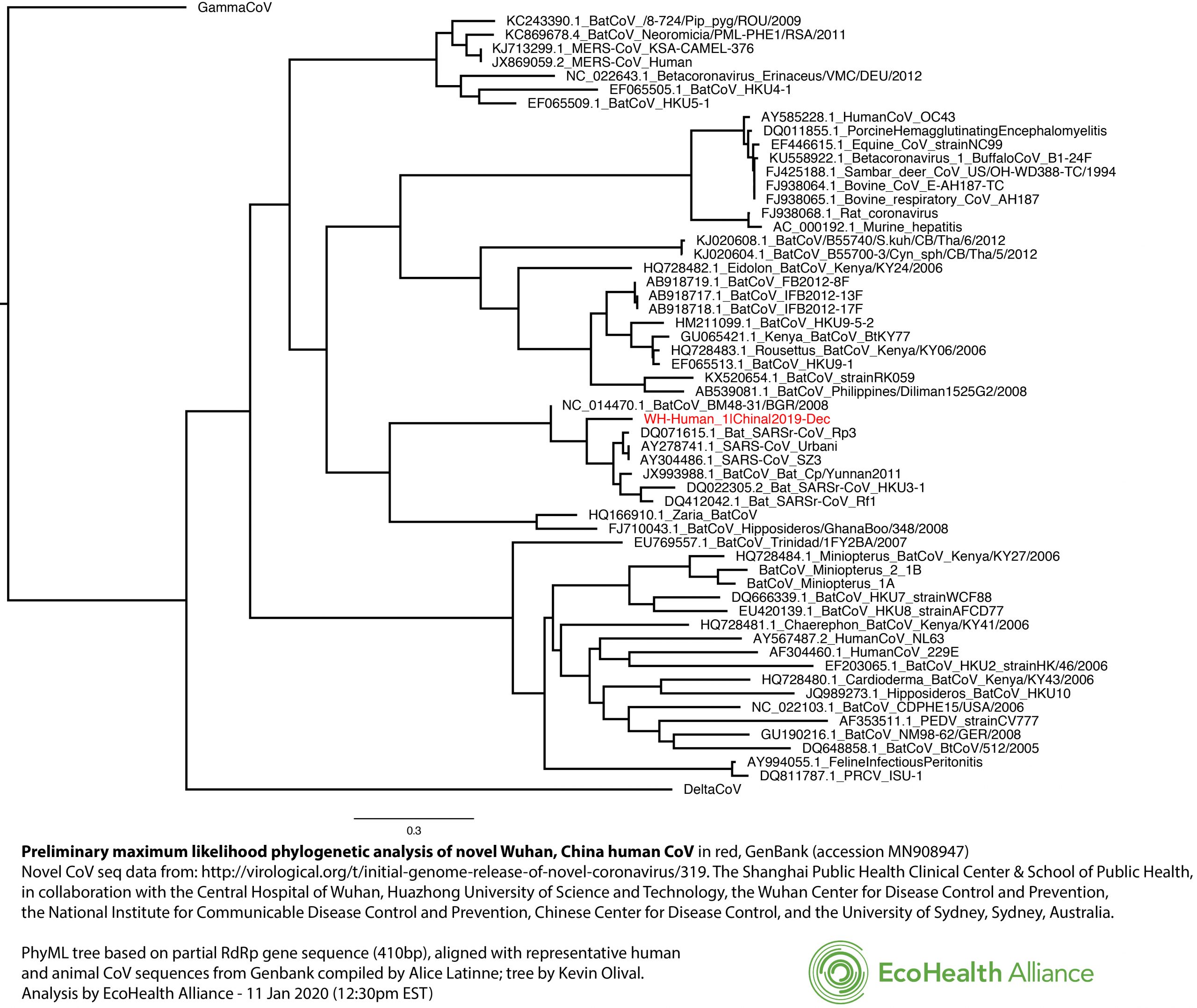 This story is still not widely reported, but has made it to The Economist.  I hope to surf to a universe where this is not a big story, but the synchronicities that found me posting this make me worry that the odds are against me.

Wuhan is the capital of Hubei province in central China. I stopped in Wuhan a year ago instead of Hong Kong on a flight between Austin and Bangkok. The flight on China Southern was half the price of flying other airlines, like Cathay Pacific. The problem I noticed was that the weather in Wuhan was much colder than in Austin or Thailand, and so I needed to pack warmer clothes just for the layover – not ideal. Also, on the return flight through China, even though my ticket showed a single stop, the airlines ended up making a second stop and everyone had to get off the plane and wait for a couple hours to go through a customs-like search. I remember one passenger shouting during this time how annoyed he was for this surprise experience. While I was also annoyed, I also found amusement in seeing another example of the multiverse working it’s magic. I could feel the universe where we didn’t have the unexpected stop, and also the universe where the ticket displayed correctly the extra stop. I saw the universe I was experience as one created by the interference pattern of these two other universes.

Today it is being reported that the Wuhan pneumonia outbreak “mystery illness” that has infected 60 people in the last 2 weeks is caused by a new coronavirus. Coronaviruses are a species of viruses blamed for such deadly illnesses as severe acute respiratory syndrome (SARS) and Middle East respiratory syndrome (MERS). Coronaviruses are enveloped viruses (HIV-1 is also an enveloped virus), which means they have an outer phospholipid bilayer membrane that includes some viral glycoproteins. The viral glycoproteins act as Trojan horse to gain entry into a host cell and also help the virus hide from the host immune system. Coronaviruses have a single-stranded, positive-sense, non-segmented, RNA genome which is the largest of all RNA viruses at around 30,000 bases. Because it is positive-sense and also contains a 5’ cap structure and 3’ poly (A) tail, it can mimic mRNA and be directly translated by the host of the replicase polyproteins, which are encoded by the approximately 20,000 base replicase gene. The replicase polyproteins assemble to form a viral replicase complex that, as you may guess, makes copies of the virus. The remaining 10,000 or so bases encode structural and accessory proteins. The four main structural proteins (all encoded within the 3’ end of the viral genome) are the spike, membrane, envelope, and nucelocapsid proteins. The spike protein has an N-terminal signal sequence that allows it to gain access to the host cell endoplasmic reticulum where it is heavily N-linked glycosylated. Three spike proteins join together to form a club-shape spike projection. These virion projections give the virus the appearance of a solar corona, from which their name derives. For a size perspective, the diameter of the coronaviruse virion is about 125 nm, so a meter long thin straw of diameter 125 nm filled with the virions would contain 8 million virions. For comparison, a single nucleotide is 0.33 nm long and so 30,000 bases has a length of 10,000 nm! Imagine fitting that into a 125 nm diameter virion.

I’ve been sick with a respiratory infection for about two weeks. A few days ago I tried out my video-doctor health plan and got a prescription for Amoxicillin antibiotics. I also went to Accupuncture and purchased some Chinese herbs. I didn’t pick up the antibiotics prescription and I tried the herbs instead. That night I didn’t sleep well and I felt my body releasing a lot of toxins. My throat was still feeling scratching in the morning with nasal drip collecting in the back of my throat. Once I spit the thick yellow mucus out each morning, I felt fine. I decided to treat myself with water and rest over the next couple of days. I felt the universe where I was taking the antibiotics. I felt the universe where I had continued taking the herbs. I felt the universe where I was drinking more water and resting (and taking a zinc lounge now and then for good luck). Right now I still feel like I have a swollen throat, but it isn’t sore. I didn’t have much mucus this morning. My nasal passages are mostly clear. I expect the three universes to merge together tomorrow and I will feel infection free. Now if I could just find a way to clear the cedar pollen out of the air!

REFERENCE: Methods Mol Biol. 2015; Pehr and Perlman, Coronaviruses: An Overview of Their Replication and Pathogenesis